The pecking order in Backyard Chickens

The phrase pecking order literally comes from the hierarchical order of a flock of chickens. This expression not only describes poultry behaviour, it also details a social leadership ranking. The term was first coined by Norweigian zoologist Thorleif Schjelderup-Ebbe back in 1921. His study observed the noticeable order of chickens, which details how chickens establish as to which chickens can access feed and water first.

How the pecking order is established.

It's not pretty, but the pecking order among chickens settles when chickens peck weaker or more submissive chickens into compliance. To make themselves appear larger and stronger, chickens will puff out their chests, ruffle their feathers when strutting in front of their coop-mates. If this has not worked, they may then use their pointy beaks to physically peck other chickens into submission

This primitive bullying tactic among chickens shouldn't last very long. However, it will establish a hierarchy within a flock and an order of who eats first, who gets to bathe first, it even affects their egg laying.

This social structure will change. Factors such as aging hens, maturing hens, illness and the addition of new birds to the flock will all have an impact on the pecking order

Where does the rooster sit in the pecking order? 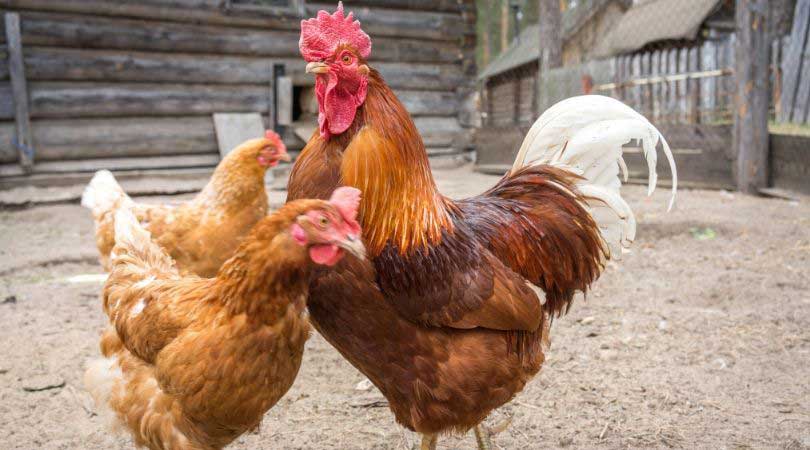 A strong "Alpha Rooster" will mostly always dominate a flock of chickens, including smaller or less mature roosters. Roosters may even show their dominance by being particularly rough with the other hens. This is a behaviour that should only last until the pecking order is established, sometimes this is merely a couple of pecks while other times this can stretch to a couple of weeks.

A rooster's dominance in the pecking order will allow him to mate with hens all day long. This act alone can be quite damaging to a hens health, for this reason it is only recommended that roosters be a part of a flock with more than 6 hens. Ideally, there should be a minimum of 10 hens per rooster.

How to prevent major pecking injuries

When chickens are establishing a hierarchy, there may be a lot of pecking going about, particularly if you have just introduced a new chicken to your coop. In fact, if pecking gets to the point where there is bloodshed then many chickens may start to peck at the poor bird's wound. The pecking may become so relentless that it leads to permanent injury or death.

For this reason, it is important to keep an eye on your flock and monitor any bullying behaviour before it gets out of hand.

Evaluate your backyard chicken coop to see what changes you can incorporate to reduce the risk of relentless bullying behaviours.

Some chicken breeds are natural bullies

The majority or the time when you see feather pecking within your flock, it is harmless social dominance behaviour. However, this behaviour can be more common among some breeds than others. For instance, ISA Brrown hens are known for feather pecking.

Your backyard chickens may exhibit healthy social habits, up until the point you introduce a different breed of hen to the coop. The different temperament of breeds can make problems, with some exhibiting more pushy bahaviour than others can trigger bullying among the birds.

For this reason, it is advisable that before introducing new birds to your flock you should see if the breeds are mostly compatible.

Learn more: Why is my hen crowing?