Parts of a Chicken you need to know

Parts of a Chicken you need to know

A part of getting to know your backyard chickens is to understand their anatomy. The ability to recognise chicken body parts will help to give you an advantage in recognising any worrying symptoms of illness or injury that your hens may acquire 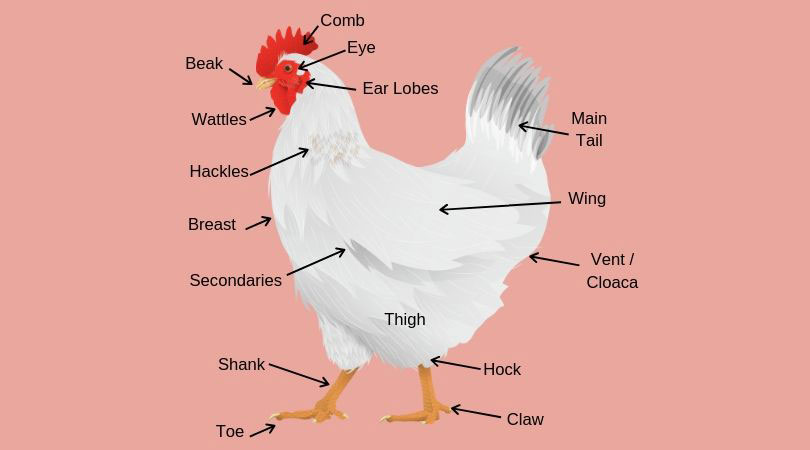 We have put together a list of the Parts of a Chicken you need to know as a backyard chicken keeper. Knowing your chooks anatomy better helps you keep an eye out for signs of illness and injury.

Comb- The soft, tall red points on top of a chicken's head is called the comb. The comb helps the chicken to regulate their body temperature in the heat. As the comb sticks up, away from their head blood flows into the comb and cools. A Comb that changes colour can indicate illness.

Beak- The mouth of a chicken is known as a beak. Inside the beak, there are no teeth. Instead, tiny barbs cover a small, triangular tongue. Because of this, chickens must always have access to water as they use it to help soften and swallow feed.

Wattles- Found under the beak, the wattles are the fleshy red lobes of skin. Some wattles are brown or blue. Just like the comb, they aid in regulating body temperature. Colour changes, shrunken wattles, or changes in the wattle appearance can indicate health issues.

Hackles- The group of feathers around your chicken's neck. These are often highly decorative

Crop- The crop is part of the chicken digestive system. Food travels from the beak to the crop. The crop stores food until it moves to the stomach. If a hen has just eaten, the crop may appear as a bulging mass on the right side of its breast.

Secondaries - Refers to the short feathers on the wing.

Claw- Also known as a talon, projects backward from the ankle

Hock- The chicken hock is the joint between its thigh and the shank. Sometimes you may hear people refer to the hock as the chicken's knees.

Cloaca/Vent- The Cloaca is an orifice used for urinating, defecating and also for mating. Not only is the Cloaca the end of the digestive tract, but it also shifts and folds back to release eggs without allowing the eggs to become contaminated by faecal matter

Main Tail - A Tail can help differentiate between a rooster and hen. Roosters are known for their high arch tails, some up to 30cm in length

Ear Lobes- Yes! Chickens have earlobes. The lobes are a fleshy skin located under the ear hole and the side of the head.