How to clip a chicken's wings

Some chickens are just natural Houdinis. It doesn't matter how high your fence is, they are completely determined to get out and destroy the garden.

For most chickens, clipping their wings will solve the problem and keep them where they are meant to be.

Wing clipping is safe and painless for the chicken, if done correctly. It is an easy way to prevent escapees and to keep your chooks where they are supposed to be.

How to clip a chicken’s wings

To clip a chicken’s wings, it is best to have two people. One person should hold the chicken with the wing feathers outstretched.

How much to clip the feathers varies depending on the bird. Some say to reduce the length of the primary feathers by 50 %. Another option is to judge the length to clip based on the coverts, which are the shorter feathers that overlap the primaries. As a general rule, the primary feathers are clipped so they are still slightly longer than the overlapping coverts. However, if your bird has very short or very long coverts, you may need to adjust the measurement.

Avoid trimming any new pin feathers, as these contain nerve endings and will bleed. They are tube shaped and shorter than normal feathers as the feather is still forming. 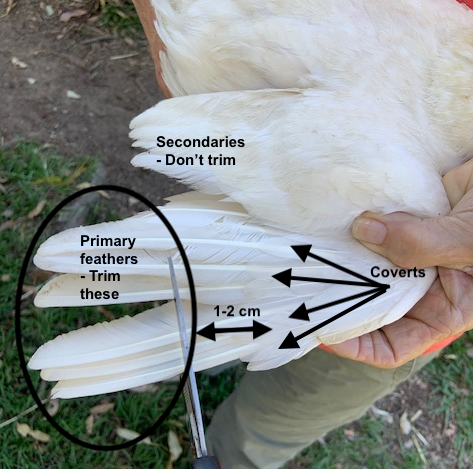 There is no need to clip chickens’ wings. However, if your chickens are escaping from their pen, wing clipping is a simple way to keep them inside, where they are supposed to be.

You should not clip the wings of show birds as it may disqualify them from competition.

Wing clipping stops chickens from flying for two reasons – it stops them from getting enough lift to fly and it unbalances them.

Most people say that clipping one wing is the best option for grounding chickens. This mostly grounds chickens by unbalancing them, although it also decreases lift.

However, a chicken with one clipped wing may still be able to escape if the fence isn’t high or they have something to jump off. They seem to get used to being unbalanced.

For persistent escapees, sometimes clipping both wings is more effective because it reduces lift significantly.

Feathers do not grow after they are cut. Instead, a chicken must grow new feathers. This is a normal process. Chickens typically moult once a year and regrow all of their feathers. When your chickens moult, they will also regrow their flight feathers and you will need to clip their wings again.

Chicken’s flight feathers do not have nerve endings or blood vessels, so clipping them does not hurt your chicken. Like human hair, pulling feathers hurts but cutting them doesn’t.

You should always ensure you are only clipping feathers, not skin. As long as you are careful not to clip the feathers too close to the base, you will not hurt your chicken.

The exception to this is pin feathers, which are newly emerging feathers. They are easily recognisable because they are small and you can easily see the shaft they are emerging from. Pin feathers are attached to blood vessels because blood flow is needed to grow the feathers. Never clip pin feathers.

Although chickens can get airborne, particularly if they are jumping from an elevated place, they cannot really fly. Most chickens can fly no more than 3 or 4 metres. Many escaping chickens clear the fence by jumping onto something first. Of course, having wings means that can jump (or flutter) quite high!

Being able to fly or flutter can be important for chickens. It helps them avoid predators, reach food and descend from high roosts without injury.

In a backyard chicken coop, chickens are protected from predators and provided with food. As long as you ensure your roosts are not too high and that your chickens can get down from roosts and nesting boxes without flying, there is no reason why a domestic chicken needs to fly.

Being able to fly can actually be dangerous for backyard chickens because of the risks of cars, predators and pets waiting outside of their coop.

You should not clip a chicken's wing while it is moulting. This will increase the risk of clipping a pin feather, which will bleed and be painful for your chicken. Wait until your chicken has finished moulting and its feathers have grown out properly before clipping its wings.

However, you should only clip the wings of chickens that are protected from predators and you should ensure your birds can get down from the roosts and nesting boxes without needing to fly.

If your chicken bleeds after you clip its wings, you have accidentally cut the skin or cut a pin feather. The blood is unlikely to clot well, so you should help by applying a coagulant. If you do not have a coagulant in your first aid kit, corn starch or flour can be used as an alternative.

Use sharp scissors, for example kitchen scissors, or very good nail clippers. Feathers are hard to cut through and wing clipping can be traumatic if you cannot cut the feathers properly.

Chickens escape their coop for any number of reasons. Some breeds, like leghorns, are naturally more adventurous than others. Chickens may also escape because they are hungry or bored. They may have been frightened by something, following a friend or trying to access a great food source on the other side of the fence.

Sometimes solving a problem in the coop is all it takes to stop your chickens getting out. That said, usually the answer is just that chickens are incorrigible and the grass is always greener on the other side of the fence.

(:1f414:) My chicken is still escaping after I clipped its wings. What should I do?

First, check to see that your bird’s feathers haven’t grown back. If your chicken was due for a moult anyway, its feathers could have grown back quite quickly..

If you have only clipped one wing, try clipping both. Sometimes decreasing the ability to get lift can be more effective for grounding chickens than unbalancing them.

Also check your coop or run to see if the bird is jumping off something in order to clear the fence. Trees, bushes, the coop roof, bins… chickens who are determined to escape will use pretty much anything to help get them over the fence!

If your chicken is still escaping after all of this, and you are sure it is going over the fence and not under or through, you will have to consider installing a roof or a higher fence.