Stop chickens pecking each other

In most cases of severe feather pecking, one or two hens will start pecking the victim. But once feathers are damaged or skin is exposed, other members of the flock will join in. If the attack draws blood, it may lead to cannibalism and the death of the victim. So recognising a feather pecking problem and dealing with it is essential.

Feather pecking isn’t always a problem. Gentle feather pecking during preening, where the “victim” doesn’t move away, is quite normal. If the pecking seems friendly, it probably is.

However, feather pecking should be stopped if:

Pecking order squabbles can look like feather pecking, but feather loss and injury are minimal (except for roosters). Pecking order fights are usually brief. Although occasional reshuffling will occur, a normal pecking order shouldn’t involve ongoing fighting or bullying.

It is important not to confuse feather pecking with:

Although these types of feather loss are not normally a concern, remember that chickens naturally peck at raw skin and damaged feathers, so exposed skin or injury can actually cause feather pecking and cannibalism.

Feather pecking is a major issue in commercial poultry operations, so there has been extensive research into the behaviour. Although there is no conclusive evidence about its cause, it is clear that some hens have a genetic predisposition to feather pecking and that once there is blood or exposed flesh, many hens will peck at the damage and participate in cannibalism.

One study likened feather pecking to a chicken version of Obsessive-Compulsive Disorder. The feather pecking is an instinctive behaviour and is not aggressive on the part of the perpetrator even though it injures the victim.

Most theories suggest that feather-pecking is misdirected pecking and foraging behaviour, which are key natural instincts. This explains why feather pecking is more common in stressed and under-stimulated hens.

Research suggests that feather pecking in genetically-inclined hens begins after an environmental trigger. Such triggers include:

1. Provide a rich, spacious environment where birds can express their natural instincts and foraging behaviours in a non-destructive way
2. Remove injured chickens from the flock straight away

Feather pecking is less likely in very small flocks of 3-4 birds. It can also be deterred if your flock is very homogenous – so one age, one breed, one colour and one size. This means there is less likely to be a “weaker” bird to pick on.

Even in flocks that have never shown any signs of feather pecking, the sight of blood or raw skin really can lead to a frenzy. We’ve heard stories from various customers that have lost chickens who were turned upon by the flock after being injured by rough roosters or accidents. And one of our own pullets had to be “rescued” after a normal pecking order fight left her wounded and all the other chickens wouldn’t stop pecking her.

How to stop feather pecking

1. Remove the victim at once. Place her somewhere, ideally a hospital pen, that the flock can see her, but not peck her. This prevents them from forgetting her, so she doesn’t have to fight for her position in the pecking order when she is released.

2. Treat the victim’s wounds with Vetericyn or an antiseptic.

3. Watch the flock carefully to ensure that the feather pecking behaviour isn’t transferred to a different bird. If it is, remove the perpetrator/s.

4. Don’t let the victim back into the pen until her feathers have regrown. If the feather pecking resulted from rough roosters, consider getting a chicken saddle to cover the bird’s back, or getting a different rooster.

5. Make a sanctuary in the pen where victims can go to escape from feather pecking. Ensure they can’t be cornered. If smaller birds are usually targeted by bigger birds, consider making the sanctuary too small for the perpetrators.

6. On reintroducing the victim to the flock, watch carefully to ensure that the feather pecking does not start up again. If it does, you will need to either get rid of the victim or the main perpetrator/s.

Feather pecking may also be discouraged by using blinders or by using “anti-peck” spray or pine tar on the feathers of the victim. 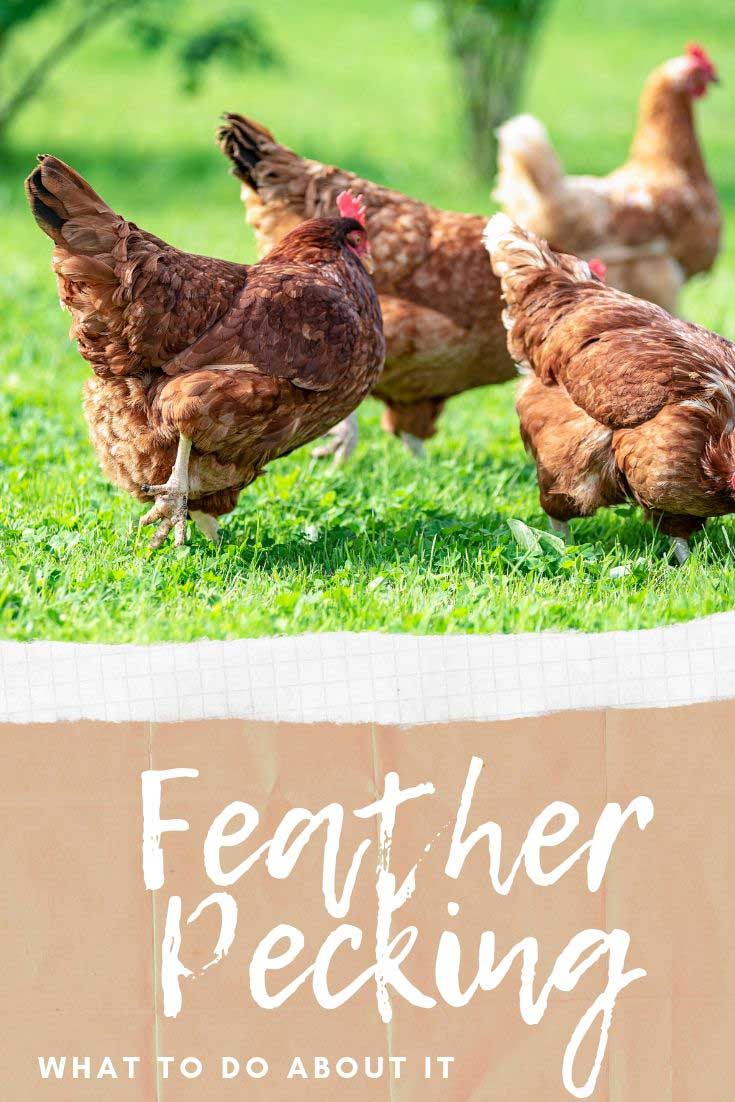